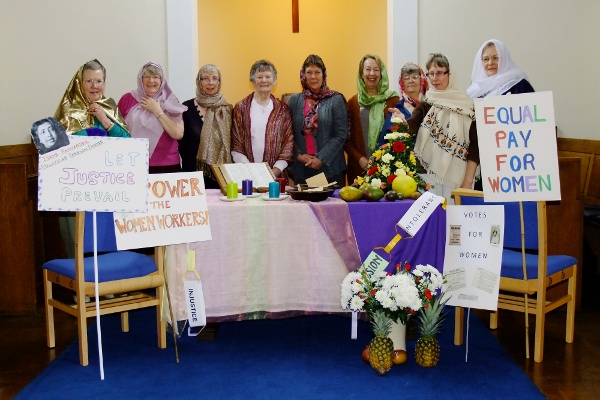 Here are nine of the eighteen women involved in presenting the Women's World Day of Prayer this year (2012). The service this year was written for us by the ladies in the churched of Malaysia, and a tourism video of Malaysiaplayedwhile the congregation gathered.

The service began with a special treat – the Children of Seely infant School brought a Chinese dragon and sang a Chinese song as the dragon danced. That certainly created an oriental atmosphere! The children were also involved in setting the display on the communion table – bringing up candles and fruit as part of the service.

The service was very thought provoking as was the reflection given by Revd Dr. Deborah Anderson. The morning was rounded off over a faith lunch, where the adult participants and congregation were able to talk about what they had heard.

It was a shame that the children had to leave early to get back to school for their lunch, but they did enjoy being a part of the day, and want to explore other ways of working with us as a church! Watch this space!