Three events were packed into the Easter Sunday this Year - an early meditation service,
an Easter Breakfast
and an Easter Communion Service.

Fourteen people met in the Garden room for the early morning meditation, a spoken service in which we reflected on what the women might have experienced as they went to Jesus' tomb on that Sunday.

We then shared breakfast - cereals and fruit juice followed by a boiled egg. 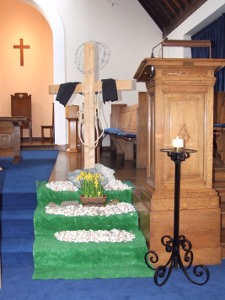 The 10.30 service was held in the church,
which had been decorated by some of our young people on the Saturday.

The theme of this service was 'what happened next' - after the women had found the tomb empty. Mark's gospel originally ended with the women struck dumb, too afraid to say anything.

But we know they did not stay silent, we know the story was told. The gospels are designed to be read by people who know the ending! 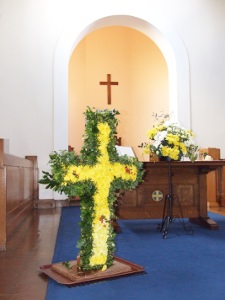 But in one way we do not know the ending - because the gospel invited us to play our part in that continuing story.

The New life that is represented by that Easter cross covered in yellow chrysanthemums
is to be worked out and lived out by Jesus 21st century disciples - and that includes us! 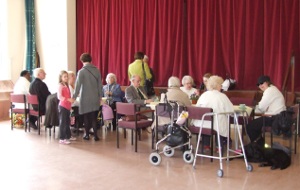 Those of us who were not rushing off to share Easter eggs with the family stayed for a cuppa!