Moderator of General Assembly at Sherwood 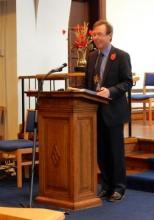 Moderator of General Assembly, Mr Alan Yates, lead Morning Worship at Sherwood United Reformed Church on Sunday 6 Nov. We were joined by the congregation of Gregory Boulevard URC (The Bridge) and one or two people from other churches.

The United Reformed Church has two Moderators of General Assembly, one a Minister of the URC (currently Revd Kevin Watson) and one an Elder of the URC- Alan. Elected to serve for two years, they chair the biennial General Assembly and its Mission Council which meets in between.  These meetings oversee the work of the church nationally. The Moderators are also the URC's figureheads, chairing major meetings and representing the denomination internally, at home and abroad.

Alan's theme was "People of the Way", the Moderators theme for the URC as a while over their two years and one of the earliest names applies to Christians. We are People of the Way, people who try to take their lead from Jesus in the way they live their lives in today's world. The name appears in the famous passage in Acts 9:1-6 where Saul is seeking to arrest any Followers of the Way - instead he became a follower himself!

Moving on to John 21:1-14, where the disciples caught 153 fish under the direction of Jesus. Alan used this passage to explore the purpose of the church. It is to embrace the whole world and all the people in it, it is to be an inclusive church, a model of the Kingdom of God - that is the meaning of the number 153. One of the strengths of our denomination is the way we succeed in holding together in a positive way differences that could easily tear the church apart - theological, intellectual, social, racial and sexual. That is part of our identity. Sometimes, we might not agree with each other, but we will and do positively encourage each other, we do not seek to pull down those with different views, we will continue to love them.

Alan then summarized some of the other aspects of our identity.

After the service there was an informal time for discussion over a cuppa and biscuit. Then we moved into the Main Hall for a catered Sunday Dinner